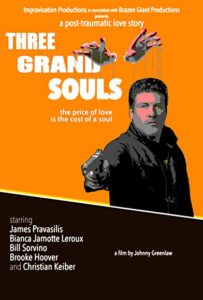 Directed by Johnny Greenlaw.  A Post Traumatic Love story. Chuck, a former Special forces vet, suffering from PTSD wastes away in a motel room drinking himself to death.  He meets Melinda, a brazen but beautiful prostitute, who tries to save his broken soul, but is her soul darker than his?  USA, Narrative, 16 Min.
Buy Tickets